How many decimals of Pi is it possible to remember? Nima Akbarian, student of engineering physics, knows 3141. On this year's Pi-Day, he demonstrated his ability by writing the decimals on the blackboards in Polhemsalen.

Since the number of pi-decimals is infinite, we would have to work forever if we were to try to memorize all of them. Then we would have to spend another infinity to list the digits. If we put the two infinites together, we get a new infinity, which may seem confusing, but let's not dig into that now. The point is that we would never reach the goal. But that doesn't stop people around the world from trying to remember as many Pi decimals as possible.

Nima Akbarian, who studies engineering physics at Uppsala University, got the idea to learn Pi decimals seven years ago, when he saw a teve program, where one of the participants was skilled at remembering many Pi decimals. Nima Akbarian thought it seemed exciting and decided to give it a try. It takes him about one night to learn hundreds of digits and once he's learned them, they remain in his memory for several months.

Do you use any special technique?

- Yes, I imagine a keypad, like on a mobile phone. As you enter numbers on the pad, they form a pattern. For example, the number 159 forms a line that slants downwards. So that's how I get a pattern that I remember, says Nima Akbarian.

This tecnique is based on his eidetic memory and it seems to work. When he wrote the decimals on the blackboards in Polhemsalen on the Pi-Day, it seemed to flow well. He wrote the numbers in sequences and after each sequence he took one step backwards, checked if it was correct and continued to write. Curious students and employees at the Ångström Laboratory came in and looked at the performance. Some took photos, some commented, some asked questions to Nima Akbarian. He stopped, talked for a while and then he procedeed exactly where he was interrupted. He did not seem to have any difficulty picking up the thread.

How do you stay focused?

- I'm so into my technique and my performance, so focusing comes naturally. But at the same time, when people come in, I can immediately switch to talking about anything. And then I switch back and focus.

The digits filled the blackboards in a steady flow. The hours went by and after about 2100 digits, an error occured. When the student who was veryfing the digits alerted Nima Akbarian about the error, he quickly corrected it and continued. At the and of the event, a total of four decimals were incorrect, but those who witnessed the event were still impressed.

Before this year's Pi Day, Nima Akbarian learned exactly 3141 decimal places, a number he thought was fun because it consists of the first four digits of Pi. The current world record is 100,000 digits and is held by engineer Akira Haraguchi. Nima Akbarian is not currently aiming for the world record but he definitely wants to learn more decimals.

What makes the number Pi so interesting? 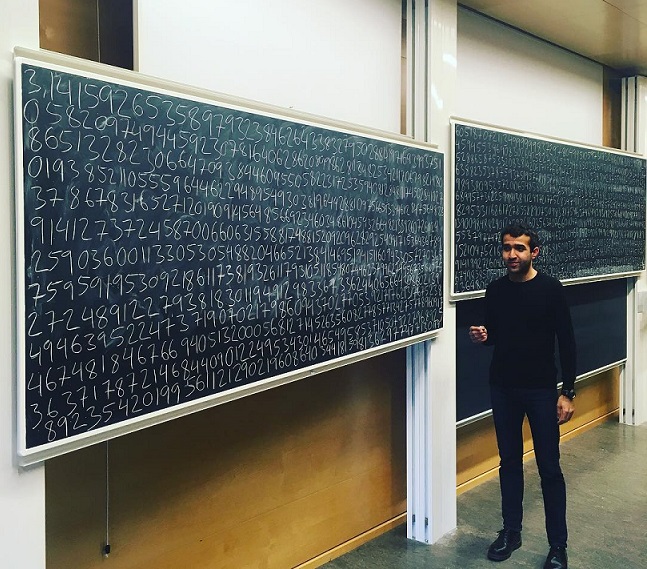